And like an ancient lava, the sun sprayed those muted golds and oranges across the slick surface of that slow-yawning river. And Timothy had upended the trash barrel, stood erect with his pipes, straight faced, motionless, like a Scottish Moai. And the tribes had begun to gather. And there was no talk of The Mohammad, of The Christ, of The Buddah, of the differences between them, between all of us. And there was talk of the beauty of it: the sun, the air, the water, the morning, the gathering. And the river kept moving, even despite the attention from them, from the sun.

Then, the water glow slowly paled, then vanished, along with the tribes, and the remnants of the night. Timothy was still playing as we walked upriver, away, and then toward home. We could still hear him at Café du Monde, Pirates Alley, and even now, as I write this. And it was good.

Words and photo By: Christopher Bryson 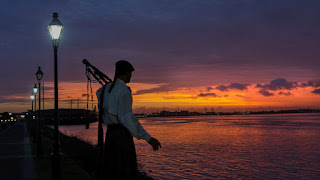 Journal Entry: 12/12/18 The Art Of Living How we choose what we do, and how we approach it…will determine whether the sum of our days ... 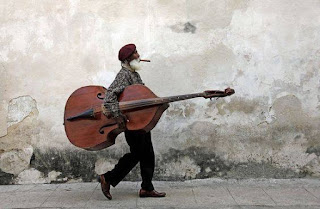 Dr Ego Prozac
Dr Ego Prozac from life inside The Sane Asylum.I am Dr Ego Prozac, a Cynical Psychologist. Some would say I am an alter ego. Others say just an illusion of another ego. It makes little difference since meaning only exist in our minds and I will only be what you believe me to be. What I observe are not things, properties, or relations of a world that exists, but rather the results of distinctions about reality I have made. So I could be wrong. I would never ask you to deal with your reality better, but I might ask you to change your beliefs, which changes the reality you have to deal with. My desire and endeavor is to try and realize what may be of value in life for those of sound mind and have a grin along the way. Regards, Ego (Dregoprozac@yahoo.com)Dregoprozac.blogspot.comInsidethesaneasylum.blogspot.com. All characters inside The Sane Asylum are real and provide readers just enough Folk Psychology to remain sound of mind.